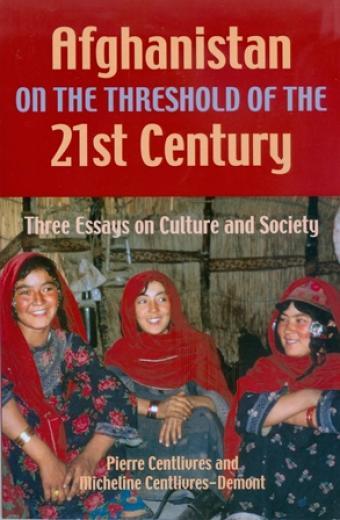 Afghanistan on the Threshold of the 21st Century: Three Essays on Culture and Society

“Two prominent anthropologists describe their long “journey” with the Afghan people, a journey that lasted thirty years and was punctuated by the events that caused Afghanistan’s transformation from the monarchic state of Zaher Shah to Daoud’s republic, from the communist dictatorship to the Taliban terror and then to the uncertainties of the Karzai era.”

List of Illustrations
Introduction
Essay One
Afghan Exiles: From Liminality to Reintegration
Essay Two
Afghan Women in the Turmoil of Modernity
Essay Three
Iconomania and Iconophobia in Afghanistan: Religious and Political Images, from Zaher Shah to Bin Laden

"The three essays in this volume are the updated lectures given by Pierre and Micheline Centlivres in 2003 in the Program in Near Eastern Studies at Princeton University. The essays shed light on the authors’ more recent work and encompass, respectively, Afghan refugees, the state of women, and religious and political iconography. After a brief introduction that summarizes the predominant events marking the past forty years in Afghanistan’s history, the first essay, “Afghan Exiles: From Liminality to Reintegration,” recounts the upheavals endured by the Afghan people since the Communist coup d’état of April 1978. Drawing on their experience in Afghanistan dating back to the 1960s, Pierre and Micheline Centlivres use the notion of the “rites of passage” to describe how refugees were able to fall back on their cultural resources in order to cope with their liminal situation in the camps in Pakistan. A complex and sensitive issue—one that for many years has had great exposure in the Western media—is explored with subtlety in the second essay, “Afghan Women in the Turmoil of Modernity.” Journeying between past and present, between private and public spheres, the essay shows how Afghan women succeeded in gradually gaining a space to speak and the right to do so. In addition, these pages demonstrate that the relationship between Islam and modernity cannot and must not be oversimplified. The third essay, “Iconomania and Iconophobia in Afghanistan: Religious and Political Images, from Zaher Shah to Bin Laden,” brings together research on the subject the authors have been studying for the past fifteen years. They illuminate the vital and vivid popular religious prints that show, for instance, religious monuments of the Muslim world, like the Kaaba and the Prophet’s tomb in Medina; children reading the Koran; and heroes and martyrs of the anti-Soviet resistance. These prints are displayed in Afghanistan as well as in other Muslim countries. The book is nicely illustrated, both with popular prints and with photographs taken by the authors between 1973 and 2002. In a lively and elegant style, Pierre and Micheline Centlivres invite us to follow their geographical and intellectual peregrinations, which reveal their deep attachment towards Afghanistan and the Afghans. This does not impede their capacity to analyze the dramatic changes that they were privileged to witness. -IHEID, Geneva, published in November 2010"