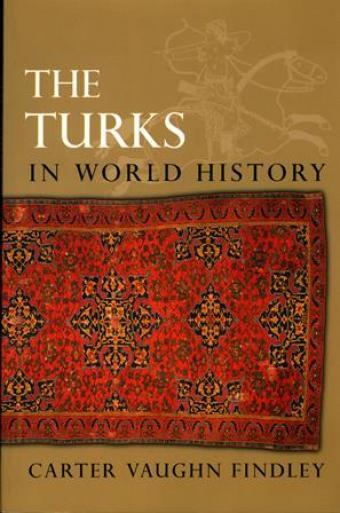 The Turks in World History

“Beginning in Inner Asia two thousand years ago, the Turks have migrated and expanded to form today's Turkish Republic, five post-Soviet republics, other societies across Eurasia, and a global diaspora. For the first time in a single, accessible volume, this book traces the Turkic peoples' trajectory from steppe, to empire, to nation-state. Cultural, economic, social, and political history unite in these pages to illuminate the projection of Turkic identity across space and time and the profound transformations marked successively by the Turks' entry into Islam and into modernity.”

"An original and masterful synthesis of the complex six-thousand year history of the tribes, clans, and empires that produced the dozens of peoples generally known as Turks or TurkicAny tribute to Findley, already at the pinnacle of Turkish and Ottoman studies, is fully deserved." —Kemal Karpat, The Historian

"Findley's book ahs many merits, and he has written a considered and balanced, as well as a readable, survey, which should help to bring the disparate fields of 'Turkic'/Turkish/Ottoman history to the attention of a non-specialist audience." —The International History Review

"A timely, rich, and accessible work. A welcome addition to the field of world history." —Africa and the Middle East

"Findley's study is to be admired for its attempt to place the history of the Turks within the larger context of world history and its wide-ranging discussion of the impact of modernity." —Middle East Journal

"Carter Vaughn Findley's book is one of the most noteworthy achievements in recent years and a very welcome and needed contribution to Turkish and Turkic studies. The story of the "Turks," from their pre-Islamic, nomadic times to their glorious and powerful Islamic empires, and to their encounter with Western ideas and ideals, is masterfully presented in a single and accessible volume accompanied by specially generated maps and pictures." —American Historical Review

"...makes an important contribution to the study of world history as well as to its immediate topic, the history of the various Turks over the past 1,500 years." —D.M. Fahey, Miami University

"Cater Vaughn Findley's history of the Turkish people certainly has original, learned aspects, and although it is not consistently supported by primary texts, it is certainly worth other scholars' deep attention.... Findley's done quite a fine job." —Journal of the Society of American Studies

"...a timely, rich, and accessible work that examines the spatial and temporal shifts in Turkic peoples'identity formation and the trajectory from steppe, to empire, to nation-state." —History

" The Turks in World History offers a masterful overview and interpretation of the entire Turkish historical experience. Throughout, Findley skillfully interweaves heritages from early nomadic life with complex subsequent encounters with settled farmers and urban societies, down to and including the recent Turkish diaspora into western Europe and overseas." —William H. McNeill, co-author of The Human Web: A Bird's-Eye View of World History